I just recently got an opportunity to go up to Glen Haven after the flooding and try to help out for a day. It was incredible to see the amount of damage done and it was awesome to see the community gathering to put things back together. My Aunt and Uncle were up there for most of the flood and are rebuilding … their house having weathered the storm.

First, the video Doug (my uncle) shot and Vaughan (his son) edited:

The amount of water coming down would have been absolutely terrifying and was very loud (I keep asking myself “from where?” It doesn’t seem you could get much higher up, but there was literally tons of water flowing through what used to be a small fork of the river). Doug’s birthday was that weekend … hence the neighbor holding up a “happy birthday” sign across the river. Their only way to communicate.

I got up there about 2 weeks after the flooding had ended. Vaughan had tried to make it up the week of the floods, but had to turn back. Sandy and Doug got out safely after being (safely, and by all accounts, comfortably) stranded for several days. Here’s what I first saw on the way in: 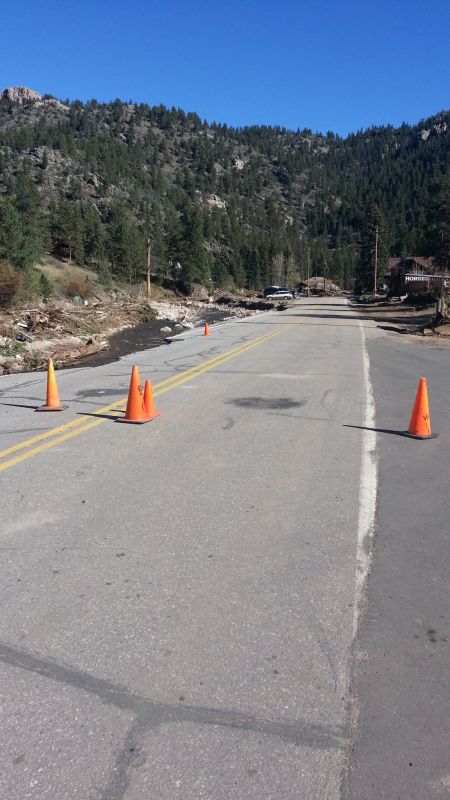 I’d already had to drive past two other barricades and past sections of road where there was only one lane or less of asphalt left. This shot is coming in from the South on Devil’s Gulch Road.

Sandy came down the road and met me, taking me to the head of what used to be the road up to their house. The road wasn’t there any more. It was being rebuilt and where we were was mostly packed dirt. Doug met me there and we continued to hike in along, and occasionally across the river.

Where the new road currently ended, we had “alternate transportation”: 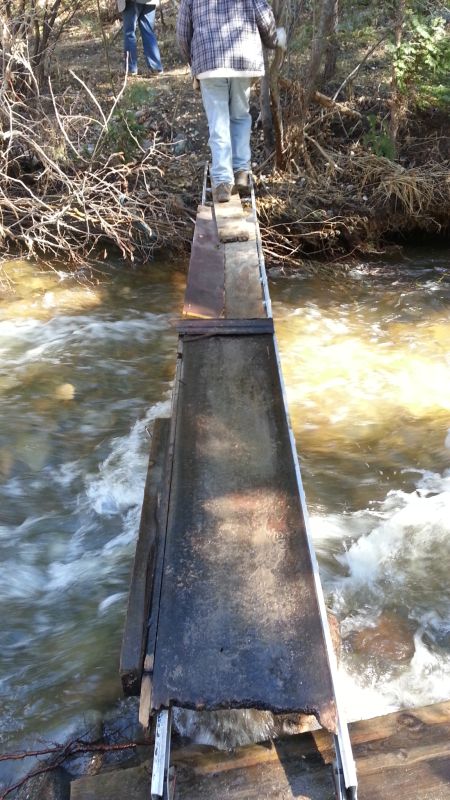 This is one of the ladder bridges. Not Sandy’s favorite, and I see why. They’re pretty bouncy as you walk across them. What they’re saving you from having to traverse at the moment is this: 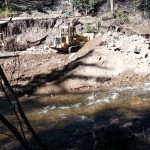 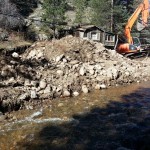 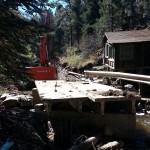 Where the vehicles are rebuilding the road is where the river was just a few days ago, and you can see how far below the old level it is by how high the remaining portion of the bridge is. They had rediverted the river back to its original route and while I was there, they managed to build the road all the way up to that bridge with rock and packed dirt. They’re not sure where they’ll get the material to keep building the road, but hopefully that problem gets solved as they get a dump truck in the next few days.

Here is where Doug tricked me and asked if I knew where I was: 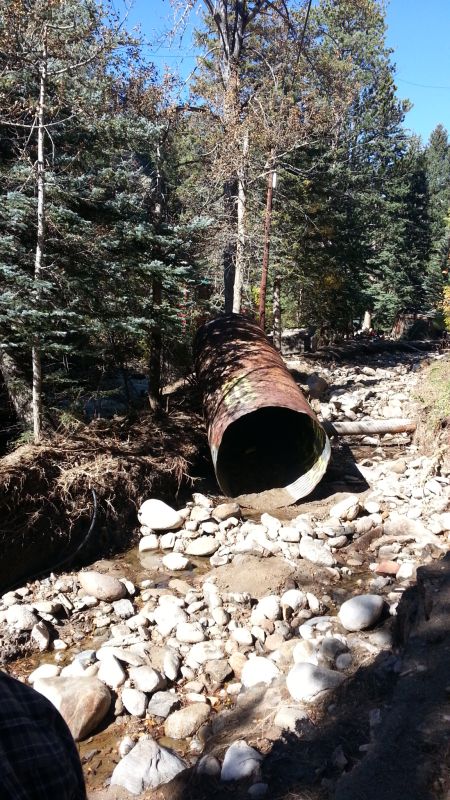 I had no idea. We were on the “wrong” side of the river as far as I was concerned, and I had no idea how far in we’d gone. But what you’re looking at is where the road used to be (though it’s been torn down between four and six feet lower) and in the background, you can just make out Doug and Sandy’s red house. We were within 100 yards of it and I was lost … the landscape (to me) had changed that much.

The culvert sitting there had flowed, end over end, down the river from higher up. It’s six feet in diameter, to give you some scale, and was the easiest way to walk up to the banks around Doug and Sandy’s house.

Seeing it from the other side (across from Doug and Sandy’s house) was just as mind-blowing: 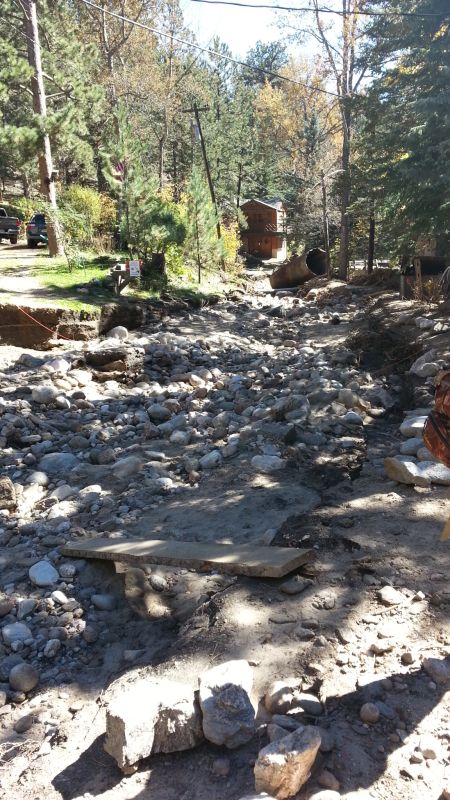 That “river bed” is several feet lower than it should be and used to be the road. Doug didn’t take me further up, but assured me that the damage actually got worse as you went higher. At some places, the “road” was now ten or more feet lower than it used to be. This area all has to be filled to make a road again before they can drive in or out. 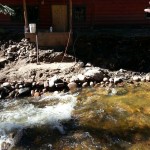 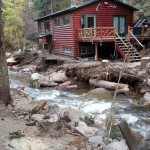 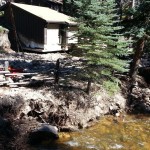 Here we see the house. The first shot is from where the bridge used to be. The land used to come all the way up to that cinder block sill in front of the door and you’d walk down to the door. Now, even though the steps are still there, you can easily imagine just removing the sill and treating that as a ground floor. The river itself used to be four feet higher than it is … not just the road bed, but the river bed got torn down much lower. This is causing some problems for his well, which is now, of course, also four feet lower than it used to be.

The second shot is just further up, by his shed. Where he used to have a bit of a front yard, the banks of the river have torn right up almost to the house itself on all sides. They think that what spared them is the root balls of the big trees you can see cut down (they were dangerous after the ground got softened that much), so they’ll be looking at doing some filling and replanting for the next hundred year flood … just in case it’s in another 35 years.

The last picture is from the house, looking back to where their bridge used to be and toward where the road used to be.

Priority 1 is getting a bridge rebuilt so he can get material (and tools) to and from his house more easily. So we spent most of the day scouting for some of his old bridge (we may have found about half of it and moved it to be more accessible when driving a pickup is an option again) and salvaging 6×6 beams to build up a bit of an embankment where he’s tamped down the ground in front of the basement door. He’ll attach a 25 foot bridge to that. He can’t easily build to where it currently is because a) it’s about a four foot drop from one bank to the other and b) there’s thoughts of raising the river level in front of his house so the well works again as-is. It’s an ambitious plan and project, but seems the best idea for now!

All in all, they’re in great spirits and the house is in great shape! We couldn’t find any cracks in the basement tile, the ceilings, or the foundation anywhere, and the mountain behind their house is drying out and firming up (possible landslide worry).

I couldn’t back far enough away to take this picture, so it’s stitched together from multiple shots. For reference, here’s the house a year ago (when I could stand in the road and take the shot):

Lots left to do, but they’ve got a good start going.