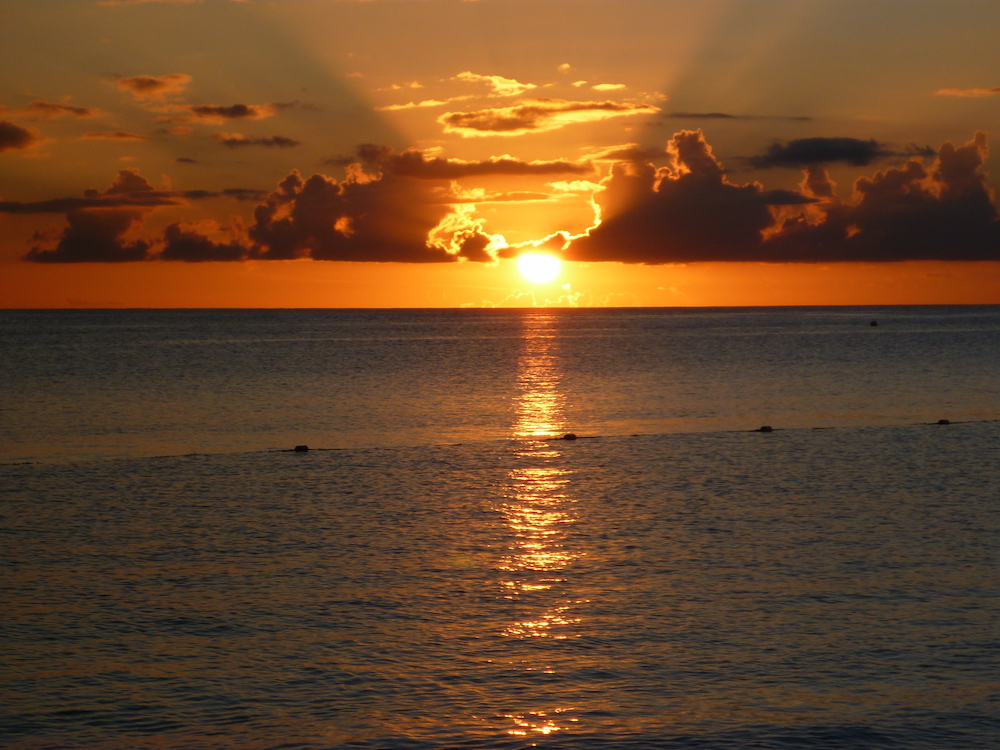 It’s taken me a while to get this up here, but I wanted to share some pictures from our trip to St Lucia!

Liz beat me to it and put together a cute photo book of the trip, so I’m going to basically copy her excellent selections up here.

(Each of these images links to a larger version)

We had a long set of flights to get to St Lucia, but this is the room view we were greeted with when we got there. Of course, being early October, this is their “rainy” season, which seemed to mean sometimes temperatures “only” in the high 70’s and low 80’s (some of the locals were positively shivering), an occasional rainstorm, and a somewhat hazy sky occasionally.

But then, it was snowing in Colorado, so that’s ok.

The flight out left late and was changed from our original itinerary (isn’t it always?). We flew from Denver to L.A., to then take a red eye to Miami so we could catch the daily flight to St Lucia. We were pretty tired when we landed and filed our way through customs.

Just like any new place where you don’t know what you’re doing, we immediately fell pray to a little mini scam. A porter “helped” us wheel our bag all of about 100 feet to the room where we sat to wait for our ride to the hotel … in exchange for $5 tip, of course.

Then we had an hour and a half trip up the full length of the island. If we weren’t quite tired enough to begin with, we were exhausted when we arrived.

The greeting crew at the Sandals did an excellent job, though. They got us (and two other couples) into some couches, our bags disappeared, and they got us some drinks while they went over the refreshingly brief list of things we needed to know about the resorts and then got us into our rooms.

Even though it can’t be seen in this picture (we didn’t end up taking a ton of pictures … it was far nicer to just relax!), you could often see Martinique or its lights in the distance from our window!

The other side of the hotel was where the action was, making our room even better. Perhaps it didn’t have this view, but it was also much quieter at night! 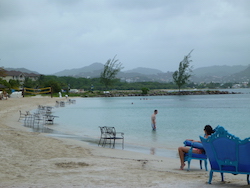 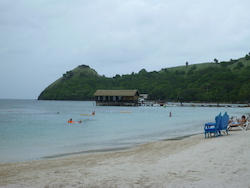 The resort is situated in a white sand bay, and it’s pretty huge! This is just a small section of it. Just in view is a pier where massages and fancy dinners can be arranged, while far to the right is another pier where boats and other water toys can be borrowed and far to the left is more and more beach. All along the beach are pools, bars, and restaurants. All of which are included in the price.

I think there were at least four pools, depending how one counts as many of them were connected and could be reached or floated to via little causeways. We didn’t spend much time in the pools or hot tubs other than when Liz needed to do a quick SCUBA demonstration to show her proficiency because the whole ocean was just 50 feet away.

She already married me. It’s too late to back out as I rampage through the oversized chess game.

We had to laugh initially. We showed up in our room one afternoon to find two towels folded as swans and a card congratulating us on our wedding. We were told there was a honeymoon “gift”, and were laughing about it just being swan-folded towels.

At some point later in the trip, I was letting the front desk know they seemed to have a fire alarm tripping (many things, including checking into fire alarms, were definitely done on “island time”, which is to say very, very slowly), and they asked if we got our honeymoon gift. I said, “the towels folded like swans?” and she gave me a look and asked if that’s all we got. The next afternoon we had this, which included a few extras as well like a unique dinner and an invitation to a “honeymoon” party where they gave all the couples gifts as well. Not a bad extra, and way better than folded towels!

Since we’d taken the trouble to travel to a different country, we actually wanted to see some of it, so we took a few trips off the resort.

One of the tours we took was a zip line tour of the rain forest. Most of these excursions required driving back down to the south end of the island and we got to know that road very well.

This trip included a guide that was with us the entire 3 hour round trip, showing us all kinds of things on the way (and stopping for some local foods and drinks to sample), and even went out and caught a tarantula to show us after the zip line tour … which Liz actually got to pet!

The other tour we took was an all day affair.

We took a catamaran down to Soufriere where the groups split up. We had opted for a personal driver (about the same cost as anything else) and got to pick what we saw and the pace we saw it at.

The first stop was their botanical gardens where there was a huge assortment of local flora, including wild growing chocolate, and this giant rock that apparently people trip on near their waterfall.

Next we stopped in for lunch at a local diner our driver knew and had some really good simple island cooking. The meals at the resort were great … well put together, fancy, lots of choices at the umpteen different restaurants … but this was just good. This island has a mixed French and English history, and you can almost imagine that might come out as a little Cajun. Both the language and the food were like a variation on that theme (to me). Lots of flavor but a little less spice and a lot more integrated with the local seafood and fruits.

Then we were on to the volcano and the sulfur springs.

The driver saved us some time and money here. Right behind us is really about all there is to the volcano here. You can take a dip in the sulfur waters, but they’re really hot (I wasn’t sure that some of the other guests didn’t get burned), and with the intense sulfur smell, we were happy to mostly bypass this and see it from the car instead of right up close for $12 each.

Next was one of the several waterfalls we went to that day. It was a short hike of maybe a quarter mile to get back here, and we had a Rastafarian “guide” (there’s guides everywhere) who took us back to the falls, which were warm mineral water.

Then he slathered us with mud. Supposed to be good for the skin, though I suspected it was mostly good for a tip ;).

We hung out for a while as our guide smoked up, ate some lunch, and fell asleep.

We saw a few other falls

And Liz got in them all. I stuck to the warm water ones.

Finally, after quite a full day touring around that portion of the island, we hopped back on a party boat / sunset cruise for the trip back to the resort.

One of the biggest things that drew us to this particular resort was that scuba dives were included. We had to rent wetsuits, but that was it.

Liz had been certified for quite a while, but I was a totally novice diver. I’d just finished my certification in Denver a few weeks earlier (in a very, very cold lake after it snowed, I might add).

Almost every trip started with a boat ride to the Pitons.

Most of the diving was somewhere around these. I’ve always liked spending time on the water, and so even the boat rides themselves were fun to me. It was quite a different thing to be under the water for that long as well.

We didn’t bring any underwater cameras, opting to just enjoy the experience instead.

Each time out, we went on two dives (a full tank each time), with some time in between for recovery / safety / food.

We both got really good and fast at preparing our gear, swapping out tanks, running checks, and all in all had a very fun and mostly uneventful set of dives. On one of the dives, the dive leader pulled us aside and told us we ought to get our advanced certifications. That we looked like we were ready for it (he was surprised that I’d only been on four dives at that point) and it opened up a lot of other possible dive types.

Over the next several days, we dove down to 100 feet, swam around and inside a sunken ship, dove along a “wall” (a cliff underwater with no bottom in sight!), did lots of reef and drift diving, and generally had a blast!

One of the common activities was to see the dive leaders hunting lionfish. This invasive species isn’t eaten by the local fish, but eat almost everything alive. They’re destroying reefs all along the Caribbean. Hunting them won’t really solve the problem, but might help a little.

One of the trips was solely a “hunting” trip as we spread out and found groups of lionfish which the dive leader would then come spear. Liz and I found one rock alone that was housing about seven of these things. Apparently, once the poison spines are cut off, they’re pretty good eating!

The rain often came in the afternoon, if it came at all. Sometimes, then, we got to ride back to the resort in a pretty good storm. There was no real chop and the rain was warm with all of these storms, plus we could just head under one of the restaurant awnings or inside to a bar and watch the weather, so this barely counted as an inconvenience.

Since our mornings were taken up with scuba, we had to spend most of our afternoons and evenings just hanging out on the beach. 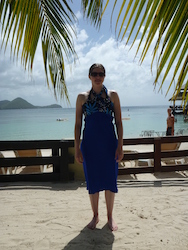 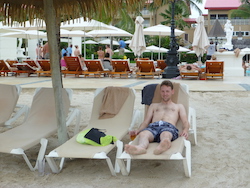 Drinks were provided, naps were taken, and many books were read (the Kindle is a great travel companion!). We even managed to not get sunburned!

Liz let me take her out on a little sunfish that the resort let us take. Their quiz was “have you sailed before?” It wasn’t rigged tightly, so it would be tough to mess up with this thing, and I gave Liz a short lesson before she decided it’d be better if she just enjoyed the ride instead of pulling on ropes the whole time.

We took out some of the other water toys at various times and mostly just did whatever seemed fun in the moment!

Including spending most of an afternoon chasing sand crabs around and trying to get a good photo. Because why not?

And the sunsets there …

We tried to take a sunset or nightly walk along the beach each night.

It was a great trip!