Liz and I headed to Mexico at the end of January to pay our respects to Liz’s dad, Paul. He enjoyed going to Isla Mujeres in the winter to fish for sailfish, and his wish was to have his ashes scattered on a similar trip. So this was a trip for his kids, Scott and Liz, and Becky to spend some time together, and to honor that wish. It was also a new place for Liz and I as I’d never been to Mexico (except perhaps as a very young child) and Liz had only really spent time in the touristy areas of Cancun, so we spent 7 days there overall.

Isla Mujeres is certainly also touristy, but still has the feel of a small island and being in-country (a little).

We had to get up at 4:30am to make the 2 hour “recommendation” of airport arrival for international flights. We flew Frontier, which gave us a direct flight to Cancun, but also was, well, Frontier.

After arriving and getting your baggage, you enter a long hallway of every rental car company and tour agency hawking their goods loudly. It reminded me a bit of leaving the airport in Kerala, India except there were only maybe a quarter of the total number of people trying to push something on you and they were only half as aggressive. Still rather intimidating initially. In fact, after just maybe 50 yards of this, we were met by an airport representative that we were reflexively trying to turn away while he was just trying to help point us to where the private cars were (we’d hired a private driver to get us to the ferry terminal instead of dealing with taxis this trip).

Walking outside, there was another wall of humanity trying to sell us taxis and other private cars while we looked for our driver and were slammed by the difference between the Denver 25 degree morning we’d left, the intense air conditioning of the Cancun airport, and the 80 degree muggy, drizzling day of Cancun proper.

We found the driver and immediately got to try out our broken Spanish. We did well enough explaining why we were there and making some small talk and had an easy drive to the ferry terminal where we again got to try out our Spanish to buy round trip tickets to Isla Mujeres. I was hoping my old high school Spanish and West Colfax salesman experience was going to be enough (it was … you don’t really need much Spanish, but when we did, I was pleased that I did pretty well).

Becky met us on the other side of the ferry and walked us the couple blocks (maybe 50 yards per block there) to the hotel, which was much appreciated, because a) it was raining so we were getting rather wet especially when traffic would pass us and splash unavoidable pools of water towards us, b) street names were a bit hard to find, and c) the hotel itself was just a single door in the middle of two restaurants and might be difficult to spot unless you were used to the crush of storefronts.

The island was definitely fairly relaxing. It’s about 4 miles long from north to south and maybe half a mile east to west. We stayed in the middle of the main town on the north side, itself only about fifteen blocks long and six blocks wide. There are two main streets in this town that run north-south. The walking street we were on in the middle contained the majority of the restaurants and small hotels and was the center of the night life as well. The other main street was the main driving street on the east side (a 4 lane, divided road, though speed limits are very low). It fronted the docks, and a few other restaurants and got you to the bigger hotels and resorts.

Hanging out in town, there were tiny shops everywhere. There was often a restaurant every few steps, but in-between would be crammed three shop fronts that all sold the same things with people sitting or standing out front calling out anything they could think of to get you to come in, though they were also happy enough to leave you alone if you ignored them or told them no. Some of my favorite call-outs from these guys were:

“Hey lady, you want a Mexican boyfriend? I cook, I clean!”

“Come on over and give me one chance to rip you off!”

“You want some weed? If I don’t have what you like, I’ll steal it for you!”

“Come check it out, everything is almost free!”

The restaurants there were quite pleasant. There was a good amount to choose from, but the predominant style was simple seafood with rice and beans in or out of corn tortillas. I didn’t find anything to be very spicy in the cooking itself, though especially in the taquerias, there would be sidebars of condiments that included hotter salsas.

It was great as someone who is normally land-locked to have seafood this fresh. When ordering a fried fish at a Cuban restaurant, they walked us over to the cooler from the catch this morning and had us just pick the fish out of the box. When we ordered sushi the first time, I think Liz and I both had a moment where we paused and noticed the sushi was room temperature … in Colorado that could spell intestinal disaster. Here, they were filleting the fish just in from the docks. It was delicious.

You could eat for anywhere from about $5 to $15 a meal if you also got a drink. Taquerias served what we’d think of as “street tacos” for about $1 each, while drinks were usually $2.

The beach was interesting as well. It is a very pretty white sand beach, but you’re only supposed to go about 10 yards into the water. I say “supposed to” because unlike here, Mexico seems to just have put suggestions in place that you’re free to ignore if you really want to and no one will stop you. Most of the time, I found that refreshing, though when I saw workers climbing rickety scaffolding 50 feet into the air with no ropes to fix a window, I got a bit nervous for them. In the case of the beach, the boating lanes were just off shore, so there was a rope to suggest you shouldn’t go further out as a swimmer. Some folks did, though most were content to sit in the waves.

There was also a neat double lagoon by the resort Scott stayed in. A giant wading pool was made by the reefs in the area.

It felt very safe there as well. Leading up to the trip, I was a bit nervous as even the official website for the island detailed the many ways tourists could be caught up in various scams, including ones involving the police. While we were there, though, we just limited ourselves to using cash we got from a bank’s ATM and didn’t try to pay with US dollars (vendors would gladly accept them, but marked up prices or gave an exchange rate that charged about a 20% fee if you did).

Finally, the people themselves were all very nice and very friendly. Everyone we spoke to was happy to take their time with us and let us (or anyone) move at their own pace.

Part of the point of the trip was to go fishing like Liz’s dad did, and we were scheduled to do that twice, but didn’t do too well at it.

The first day ended up being cancelled, which was a blessing. The whole day before our group was chatting about the bad weather predictions, but the captain wanted to wait and see. Finally, the morning of the trip, we got to the docks and he did cancel it … after pretending we’d go out and we needed to brace ourselves for the rough seas. Even the competitive fishermen we were supposed to share the boat with weren’t interested in going out. Eight foot waves with eight feet between waves was predicted along with forty knot winds. It would have been rough indeed.

The next day we were scheduled was much nicer (only about 5 foot waves with probably 20 feet between waves in the beginning, calming later), but that didn’t save us from seasickness unfortunately. It was about a 30 minute ride out to where we’d start fishing and the four of us ranged from a little uneasy to very, very green by the time we’d arrived.

I hadn’t been deep sea fishing since I was about 13, and on this trip, they were after sail fish. These fish jumped out of the sea, fought back on the line, and took ten plus minutes to reel in. They also fished them as catch and release. I think we caught about 6 that day.

Liz, unfortunately, was very seasick by just a couple hours in. They decided to have their remembrance for Paul and head back in.

We also took a day trip on our last day there. The same private driving company offered tours that Scott had booked, so Liz and I joined in and we headed out for the morning in Tulum and the afternoon at the Grand Cenote.

Tulum was a Mayan city / temple built in the 13th century with one side being a cliff facing the sea. It had temples to various gods and beautiful views and beaches (including a protected sea turtle beach). It was really interesting to explore. 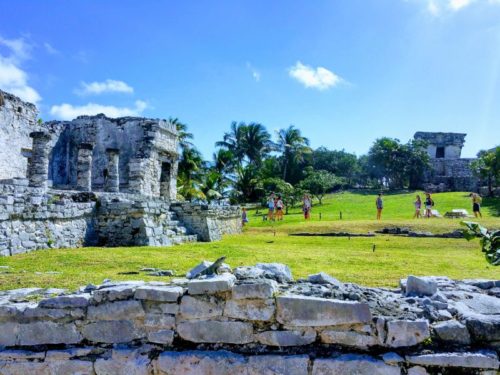 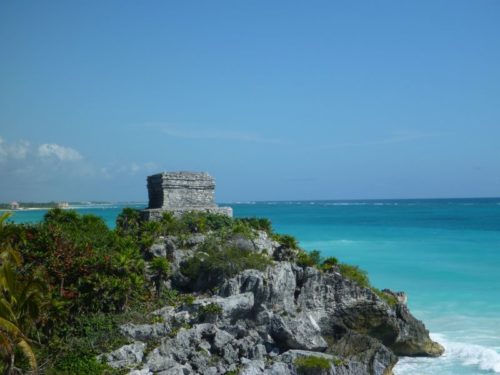 The Grand Cenote, though, I think was one of the more strikingly beautiful and interesting places I’ve seen. Cenotes are basically sinkholes or collapsed caves with freshwater in them. In this location, they’re often from limestone wearing away from rainwater and create massive cave systems that connect various cenotes miles apart.

We got to go down to the water and snorkel around. On the surface, it’s very pretty with the mottled shadows of stalactites and forest above falling on the water filled with turtles and small fish. This one held a “tunnel” that was only half submerged that connected two cenotes. But just as striking was the view under the water. You could see cave systems and tunnels sloping away into the gloom with stalactites and stalagmites reaching into the darkness for a few dozen meters before it was just black. It looked like the opening to a horror movie! We saw some scuba divers who had just finished diving a huge stretch of the system through those caves. Pretty sure I wouldn’t have the gumption to try that.